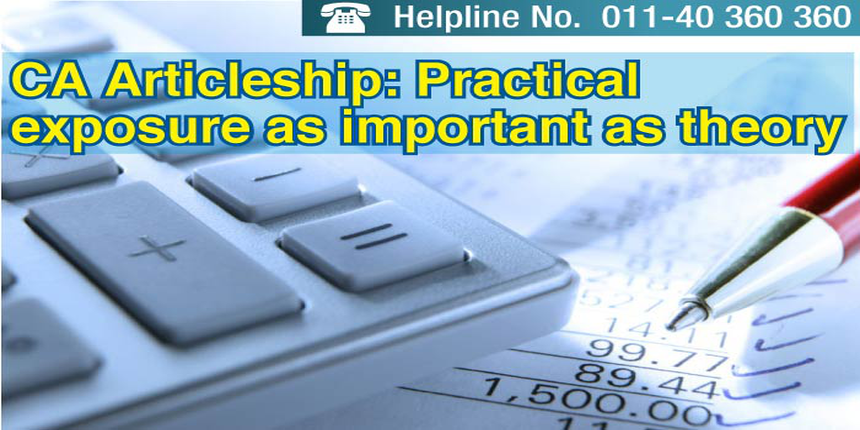 In October 2007, when CA Radhika Singhal began her articleship under a practicing CA, her hopes were dashed. She was made to report to a lawyer who hardly gave her any work. She quit and joined a new place where she managed to get good experience. However, the company did not keep track of attendance. The articleship period for CA training is three-and-a-half years and hence Ruchika had to work another five months to complete the articleship. Nevertheless she managed to finish her CA in 2011 and now works as Assistant Manager Accounts with Ayurvet Limited in Delhi. Several problems crop up during the mandatory training for all the CA, CS and CMA programmes. Let’s explore what they are.

How training helps
All three courses require training as an eligibility criterion for getting the certification. However, that should not be the only reason for doing it. “During the course you come to know about the concepts but not their implementation. Training is important to get a hands-on experience in areas like auditing, reporting, taxation etc,” says Ritesh Aggarwal, Manager Business Support and Corporate Recoveries, Barclays Bank, Delhi. He adds that training under a big name also gives one an opportunity to meet influential clients.

Some students may be under the impression that the significance of the training is of the level of internships done during any study programme, and it is easy to get opportunities. But this specific training is what distinguishes them from an MBA. The articleship sets the base for becoming an efficient accounting professional.

Some instead of undergoing training try to arrange fake certificates! This leads to lack of practical knowledge, which in turn affects placement. Not undergoing training can be harmful in the long run. “I have seen people who are working in a firm under juniors or at par with them because they did not undergo training during their studies. Remuneration-wise they were offered not more than Rs.8,000-10,000 per month initially unlike the trained ones who get Rs.30,000 plus,” says Ritesh.

The biggest problem a CA student faces is of finding a company or a practicing professional to train under. Though CS and CMA institutes assist its students, the hardship is no less. Harsh Ranjan, hailing from Motihari, Bihar, came to Delhi a year ago to finish his CS course and training. He has been searching for an organization that can provide him training since he passed his Professional level exam in January 2012. “Six months have passed and I am sitting idle,” he shares.

Harsh has been going for interviews but due to scarcity of vacancies, he has not been able to get through. He even attended a campus placement event organised by the institute to help find training opportunities. But Harsh was in for a big shock. “I was told that each student will be given at least two interview opportunities. But I saw that some students were given 8-9 chances while many returned without even a single try,” he said.

So, how does one go about it? Ritesh explains that in the case of the Big Four “contacts” will not help you get in and merit plays a role. Big Four comprises Price Waterhouse Coopers, Deloitte Touche Tohmatsu, Ernst & Young and KPMG, four of the largest international professional services networks in accountancy and professional services. They handle the vast majority of audits for publicly traded companies as well as many private companies. He believes that the students’ marks make a difference. “Students who face problem in getting through are either who do not have good a scores or got through multiple attempts,” he says.

Practical issues: Stipend & Attendance
During CA articleship, most of the students attend coaching classes for course completion as ICAI provides only two-month optional classes before exams. Rules say training has to be attended between 9 am to 6 pm, so, coaching is taken before this time period. The schedule gets hectic and many students find it hard. However, people in the industry say that being punctual is part and parcel of being professional. If students are allowed to relax during training how will they perform on the job? Many companies don’t offer a stipend despite rules established by the administering bodies. Seema Khanna, a qualified CS, did training in the Secretarial and Taxation Department in a company. "I was not happy as I wanted to train under a Practicing CS. Secondly, they did not offer me any stipend too for initial 6 months," she says. However, companies like JP, Kapur and Oberoi even have a practice of opening a salary account as soon as students join.

When should you train?
The CS and the CMA allows student to undergo training after completing the course. However, many students pursue before giving exams. Abdullah Fakih, a CS student is one such student now pursuing the Professional Level “Training is almost a full-time job and requires about 10 hours daily. I feel it is too taxing to study simultaneously. Even the study leave given to trainees just before the exams is around 30 days, which is insufficient. I would rather clear my exam first, rid myself of the anxiety, and devote a whole-hearted effort towards training,” he says.

A piece of advice

Experts say any firm, which is at least 10 years old would have good work available for articles. To receive interview calls, your scores matters and number of attempt you took to clear the examinations, too. Rest depends on your communication skills. Once you are in, you should give your best at every stage. "Initially you might be serving your trainer at a very low cost. But four years down the line you will realise that what you learnt has created a good base for you shaping well the rest of your career," says Vijay Agarwal, Assistant Manager, VISA Steel Limited, Cuttack.